Sea Bright Riverfront Properties Could Be Tabbed For Redevelopment 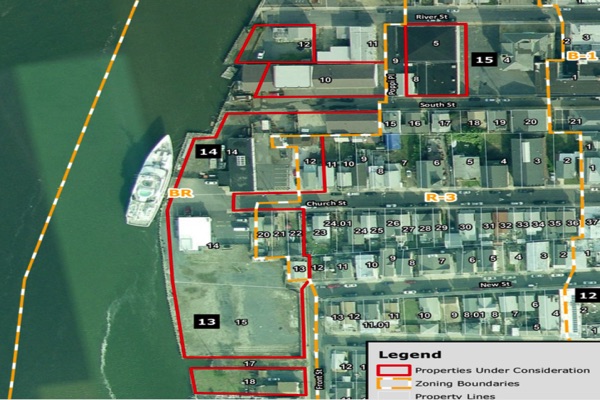 SEA BRIGHT: A report before the borough planning board recommends that 14 downtown riverfront properties in the borough should be redeveloped.

The report was based on a study performed by Cofone Consulting Group which is stating that properties should be designated as an "Area in Need of Redevelopment with condemnation."

The other property, located at 8 River St., is owned by Icarus Development, LLC, based out of Rumson.

The report states that the "overall assessment finds that the Study Area suffers from either underutilization, unsafe conditions due to vacancy due to Superstorm Sandy damage or obsolescence, or in the case of some properties, proximity to other properties that exhibit circumstances that qualify for inclusion within an Area in Need of Redevelopment."

Leckstein said the borough council asked the planning board to review the report at its next meeting on Tuesday, April 25 to see if it "meets the legal criteria of an area in need of redevelopment."

If the board accepts the study, the council will then have a chance to adopt the study.

Last year, Jesse A Howland & Sons, Inc./CJM Associates of Sea Bright, LLC submitted a request to New Jersey Department of Environmental Protection (DEP), Land Use Regulation Program for CAFRA approval for a large residential complex on the area. The developer was looking to build 147 units of multifamily housing from River Street to Surf Street on river side of the borough. The housing would contain a mixture of 1-bedroom and 2-bedroom units located in three buildings. The plan also calls for 212 parking spaces.

However, the DEP has not yet granted CAFRA approval and Leckstein said the developer is now seeking a waiver from the 100-foot riverfront setback rule for the complex.

Leckstein said Stavola has "never proposed any plans to Sea Bright and nothing is before the planning board."

"Their project doesn't have anything to do with this discussion," Leckstein said.

"We've made it a point in the past that we're not proposing anything in any areas where people live," Leckstein said.

In December, the borough council adopted a "downtown properties condemnation redevelopment study" for three adjoining lots on the corner of Route 36 and Main Street. No action has been taken by the council on these properties since that time.