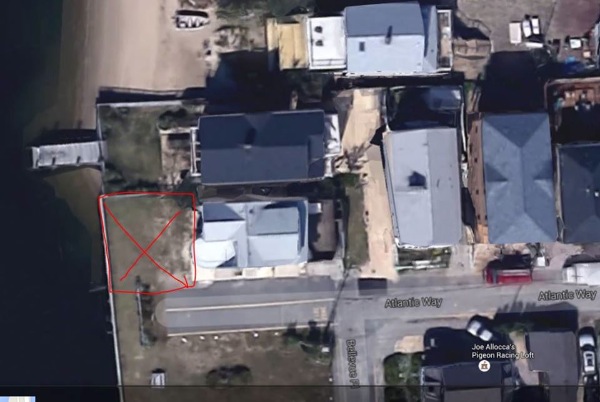 The area marked in red was vacated by the Sea Bright Council this week.

SEA BRIGHT: The borough council's decision to vacate a small piece of riverfront property caused a stir at its Feb. 2 meeting.

The owner of 3 Atlantic Way, who lives directly to the east of a portion of Bellevue Place, which is about 32-feet-by-37-feet, according to Councilman William Keeler, is looking to build a deck on the property and needs the borough to vacate the land so he can do so.

"It is selfish, I admit that, we want to improve our property," 3 Atlantic Way owner Tim Parker said. "There is public access to the river..and it was never my intent to take Atlantic Way, it's just that small portion in front of my property."

Borough Attorney Robert McLaughlin described Bellevue Place as a "paper street," which gives the borough an easement to create a street, and nothing else.

"The property known as Bellevue Place has never been utilized by the borough for a public street and therefore...the mayor and council have determined that the public interest will be better served by releasing these lands and extinguishing the public right to this property," the ordinance passed by the council states.

It goes on to say that vacating it will help increase the tax base for the borough and that it "will not vacate or eliminate the end of street public access."

Several environmental groups requested an amendment to the ordinance, which was unanimously agreed to by the council.

Many of Parker's neighbors attended the meeting and said they supported the borough vacating the property so he could build the deck.

However, others, including Thomas Scriven, a resident of 9 Atlantic Way, stated that he is against the borough giving away any land for any reason.

"Once you give land away, it never comes back," Scriven said.

Marianne McKenzie said the move was not in the public's best interest, even if it adds to the borough's tax base.

"I don't see any public purpose or any good for the town and I believe that it's an improper action by this council," McKenzie said.

Vincent LePore said the land is better left alone and that if the borough kept it, it would help satisfy future increased public access requirements.

LePore said there could be litigation if the ordinance was adopted.

"I remain steadfast, it will be challenged if it's adopted, and economically it's a losing proposition," LePore said.

The ordinance was adopted by a 4-2 vote with Councilman John Lamia and Councilwoman Peggy Bills casting the negative votes.