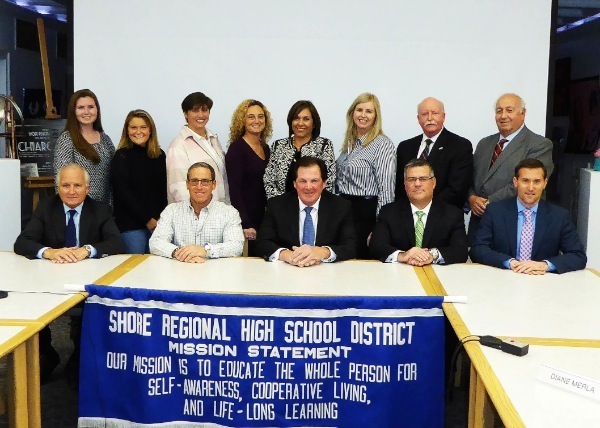 WEST LONG BRANCH: The Shore Regional High School Board of Education (BOE) closed its monthly 2015 public meetings on Thursday and looked to the January Organization meeting and other matters that will carry over to next year.

Mr. Thomas Welsh of Oceanport was submitted to be a new member in 2016. He was not in attendance and Board Member Susana Markson was not comfortable with voting on the motion to accept him without meeting the candidate. Due to strong recommendations by other members the Board accepted with one abstention. Mr. Welsh will be asked to attend the special committee meetings to meet the members in that fashion.

In the wrap up session the members covered administrative matters defined by the sitting board committees for Finance, Personnel, Building and Grounds, Technology- Education- Curriculum, Policy and Planning, Athletics' and the Superintendent Report in which bullying (None) and suspensions (1) were noted.

The Personnel report included 2016 Teaching Placements and Substitute Teachers that some roles will be filled by returning past graduates of SRHS. Technology, Education and Curriculum has work is underway to determine if another athletic function should be introduced. Concern was for costs, with positive support for the function if it is financially doable.

Student Representative Reports by Madeleine Costine and Kathryn Lamb noted the excellent student response to the messages of the military visitors on Veterans Day. The students had many questions and interviewed bios of the experience. It will return in 2016. Asst. Principal Simonelli was thanked for his role in setting up the event.

An excited Board President Ron O'Neill gave details on SRHS success in sports with Girls' Tennis as Group 1 State Champs; Boys Soccer taking the B-Central crown; Gymnastics wrapping up a fine season; Girls' Soccer going to the Spartans in B-Central Division and this week playing for the Group 1 CJGI; Boys Field Central Champs, N2G1 Sectional Champs and playing for Group 1 on Saturday; Football was the B-Central win; and the B/G Cross Country at Holmdel.

In the Public Comments period of the meeting two members of the public asked questions.

An Oceanport resident asked if Sea Bright (one of the four towns sending students to SRHS) can go to another district school in order to not have the current school tax levied (Sea Bright has said the state determined formula is excessive and unfair compared to the number of students attending from each sending town.)

Superintendent Farrell said he understands the state education authority must sanction such an attempt to move students, and individual towns should not pursue that matter with other schools unless the state has knowledge of the action. There are about 30 Sea Bright students at SRHS, of the about 600 in SRHS budget.

A resident asked what response had been provided to a letter from Sea Bright Mayor Dina Long requesting a SRHS Board referendum to seek change the state derived formula for tuition of students. Superintendent Farrell said the response has been in process and an answer will be reviewed by the board and mailed on Friday. Response wording was not provided in the meeting.

Later in the meeting Sea Bright board member Susana Markson made a motion to have the board support a referendum challenging the state allocation formula. No second to the motion by another board member was made. The motion was dropped.

The Board voted to go into private session.