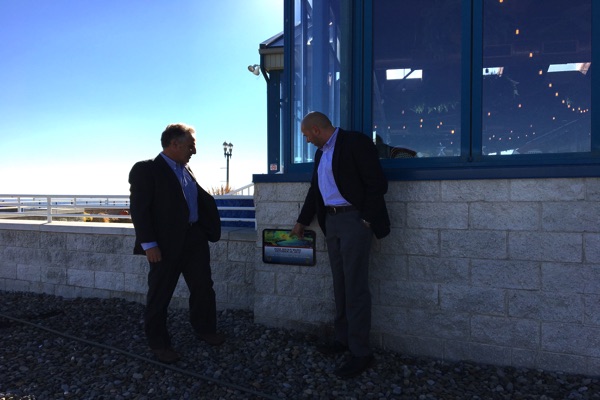 LONG BRANCH: When Superstorm Sandy hit Long Branch on Oct. 29, 2012, locals did not know what they would wake up and see the next morning once the rain and wind stopped and the flood waters receded.

Rooney's Oceanfront Restaurant General Manager said he arrived at the eatery the next morning and saw some crazy sights.

"These tables that were made of cement and then granite on top of it were lifted all the way into the middle of the parking lot," .... said. "It's amazing what water really can do."

The restaurant's outdoor bar where those tables are located received the most damage, and there was flooding in the basement. Luckily, the restaurant was reopened three days later, but the the storm left its mark.

Now, a reminder has been left outside the restaurant, located at 100 Ocean Ave., in the form of a sign on its northernmost outside wall showing the high water mark during Sandy.

The signs are part of a countywide collaboration with FEMA and the National Flood Insurance Program to promote awareness of the dangers of storms like Sandy and encourage towns to continue to take steps to prevent future damage.

A small ceremony unveiling the sign was held on Friday Nov. 18 at the restaurant and was attended by local officials, including Long Branch Mayor Adam Schneider, who said the signage is a reminder of how serious storms like Sandy can be.

"That storm taught us a lot about how bad it can get," Schneider said. "It's a little bit of an education for everybody."

He said the sign is a lasting marker and shows that "building codes work" and can "help minimize the harm."

"If you do everything right, you're safe here, and if you don't you find yourself in harm's way."

As part of the High Water Mark project, Long Branch will continue to place the signs in "several prominent places within the city," according to a post on the city's web site.

"Our goal is to continue to conduct ongoing education within our community to build awareness of flood risk, and to complete mitigation actions to build community resilience against future flooding," the post states. "Part of this initiative includes an induction into the Community Rating System that will ultimately result in a reduction of flood insurance premiums."