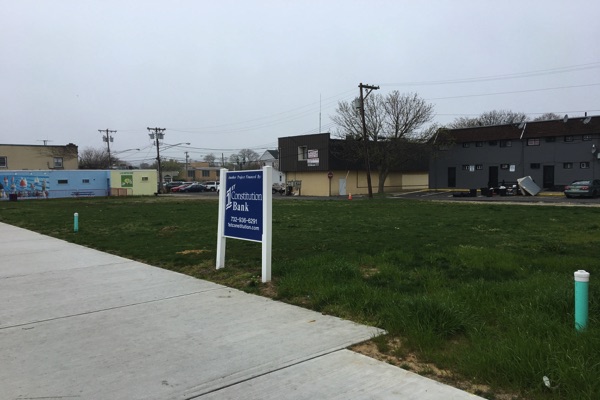 LONG BRANCH: The vacant land on Brighton Avenue which once contained several businesses and apartments that were lost to a 2012 fire will not be vacant for much longer.

The owners of the Bagel Guys Deli, 75 Brighton Ave., will be moving down the street to an empty lot that once contained a multistory building right next to East Coast And Jewelry Exchange.

The owners were given permission to do so by the Long Branch Planning Board last August. The board granted the applicants, Westend Group, LLC, site plan approval to construct a 4-story building that will have the bagel deli on the first floor and 6 apartments on three floors located above. At least two of the apartments will be rented by the owners of the business.

The owners needed a variance for the height of the building and for a lack of parking on site, but are providing two spaces in the rear of the building and two more offsite. The West End Overlay zone was created with the intention of allowing smaller projects to share parking with larger parcels in the area, but still calls for the parking requirements.

Long Branch Business Administrator Kevin Hayes said construction of the building could begin in the next couple weeks as the owners have been given approval and submitted the necessary paperwork.

The development of another lot, owned by Martin Grubman, has not seen any forward movement, Hayes said.

Grubman received approval to build a 38.5-foot, 4-story building with two retail spaces on the first floor and 12 apartments on the remaining floors at 57-61 Brighton Avenue in 2016. Grubman owned one of the buildings lost to the 2012 fire and is looking to rebuild what was previously there with some changes.

The original building had three floors and more retail space, but it will now have the exact same number of apartments after the plans were slightly modified to include more 1-bedroom units than originally proposed, following some comments from the planning board before the group approved the project.

There is still one empty lot that was lost to the 2012 fire that does not yet have a developer. A group presented informal plans to the planning board, but have not come forward with a formal application as of May 2.