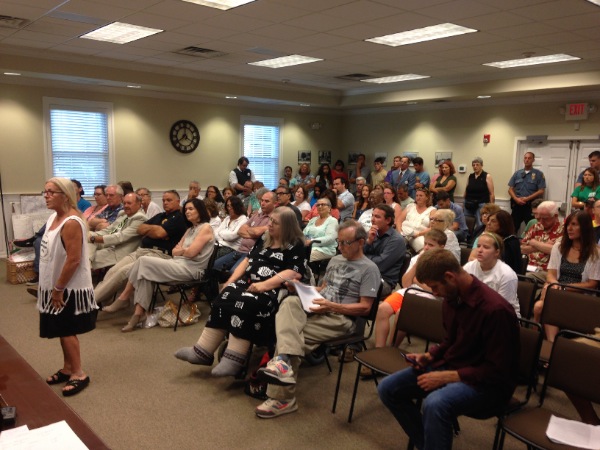 WEST LONG BRANCH: A large group in support of the expansion of West End Park in Long Branch packed into the borough council chambers on Thursday night, July 23, for the monthly Monmouth County Freeholders meeting.

The group wanted to show the freeholders the amount of support it has for the county to expand the park on the corner of Brighton Avenue and Ocean Avenue as opposed to the possibility of tearing down the existing structures to create more commercial space with a religious use on the second floor.

"We believe our mission is a benevolent mission and a legal mission and we do feel our goals will be accomplished," said Vincent LePore, who originally proposed the idea of the park's expansion.

The Long Branch Council passed an ordinance creating a zoning overlay that would allow religious and/or residential uses on the second floor of commercial buildings in April, prompting a lawsuit from local attorney Scott Kelly. Kelly states in the lawsuit that such action should be considered "spot zoning" and that the ordinance is "arbitrary, capricious and unreasonable" and should be struck down.

However, the Long Branch officials would have to apply for the grant, and there has not been much support to do so.

County Counsel Andrea Bazer said the county has always taken a "home-rule" position and follows the guide of the municipality.

"Understand, it's not a county issue, because its not a county-owned property and it's not for us to make these decisions," Bazer said. "This is a municipal issue at this point."

Monmouth County Freeholder Lillian Burry said she spoke to Long Branch Mayor Adam Schneider on the day of the meeting and was told by him that "Long Branch has no intention of purchasing (the land) for a park."

This did not stop supporters from voicing their support of the park expansion.

"We want something that's good for all and goof for the quality of life of future generations," Ocean Township resident Patty Fisher Verrochi said.

"That park needs to be expanded," said Elberon resident Sharon Buchanan, who is the parent of a disabled child. "In Long Branch there are very few opportunities for my daughter to play on any playground equipment because it's not adaptable for a child with special needs."

"If we extend this park, you're going to extend the quality of that part of Long Branch," West Long Branch resident Paul Giglio said.

Monmouth County Freeholder John Curley reiterated the point that the county cannot take any action on the expansion of the park if the city is not interested and said that the best way to make a change is for those in favor of doing so to follow the course they have already taken; litigation.

Kelly told Word On The Shore he expects the lawsuit to be heard by Monmouth County Superior Court Judge Lisa Thornton in the beginning of August.