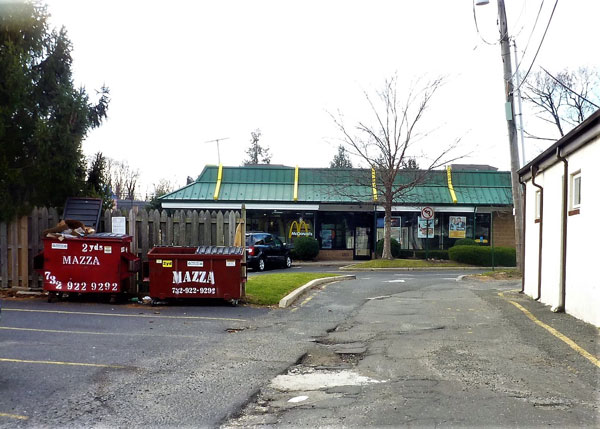 West Long Branch: The December Borough Council meeting began with a moment of silence of in honor of President George H.W. Bush in recollection of his passing and remembrance of his contribution to the country.

At the Caucus meeting there was a brief discussion about the exit driveway from McDonald's on Cedar Avenue, near where it meets Locust. The sign posted indicates left turns are not allowed.

"No Left Turn" the sign says, but experience and some auto accidents prove the danger there, due to the lack of visibility of approaching cars as the road turns.

McDonalds is planning to enlarge the building and driveway. Police study says the turning left on the exit is dangerous, yet the sign gets often ignored, not being a police set warning. That will be changed to add safety when the County and State traffic experts are brought into the new MacDonald's structure, it was hoped for by all council members and supported by local police.

The side entrance off Locust into the lot is McDonalds, and will be fixed to get rid of the potholes and use by customers. (See photo.)

Also, the Holiday Tree lighting and Chanukah Menorah lighting went very well, thanks to the Recreation Committee and DPW support, Mayor Tucci said. She also thanked Carrie Sniffen and the Sniffen family for all they have contributed to the community as Carrie submitted her resignation from the Recreation Commission.

Toni Mullen has also resigned from her role as Tax Collector, Registrar and Secretary to the Board of Health. Her replacement will be named shortly.

The borough authorized agreement by the emergency services people (fire, first aid and other health groups) to go forward in joint cooperation with the county and towns around to continue good services for residents and businesses.