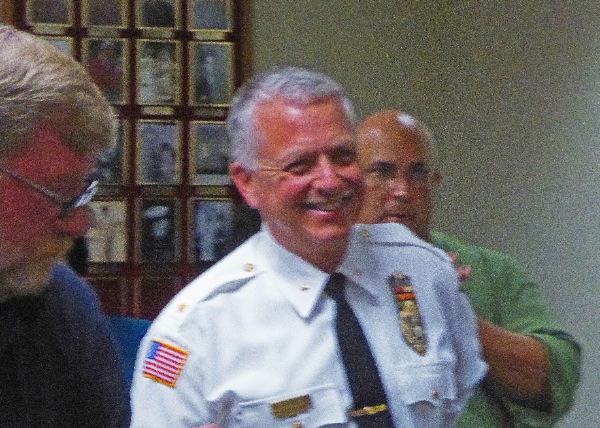 WEST LONG BRANCH: Police Chief Lawrence (Larry) Mihlon will retire from the force in February 2016, 33 years after he began his police career with the borough.

The announcement was made by Mayor Janet Tucci at the Oct. 7 West Long Branch Council meeting with her thanks and best wishes shared by the room full of residents who quickly stood to recognize the man they have all come to know.

Mihlon came to the WLB Police Department after brief positions in Sandy Hook as a National Park Ranger. He transferred to Shenandoah National Park in Virginia, where he was stationed when he got the call from WLB Chief Ira White that his application here had been accepted.

Borough Clerk Lori Cole read the chief's retirement request letter in which he wrote that he had enjoyed a tough and most enjoyable career thanks to "... the finest Police Department and greatest community in the State of New Jersey."

He extended his thanks also to Business Administrator Vic Cantillo and Attorney Greg Baxter as well as to "the woman reading this letter to you Borough Clerk Lori Cole."

From Word on the Shore, our great appreciation and best wishes. Enjoy your work in the cinema, a new success story.