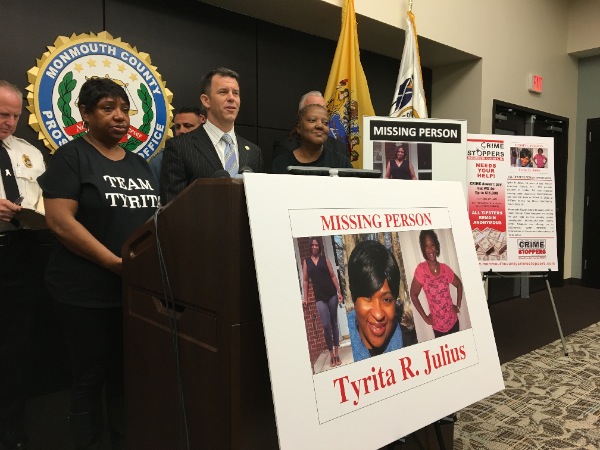 FREEHOLD: Authorities are still searching for a woman who was last seen in the Foxchase community in Tinton Falls last month.

Tyrita R. Julius, 41, of Linden, has been missing since March 8. A day later, her mother Queen Julius, called the Linden Police Department in Union County to report her daughter missing. Ms. Julius told authorities Tyrita had been spending time with a female friend in Tinton Falls on March 8, but failed to return home later that evening.

Julius is a 5'7"-170-pound black female last seen wearing a black jacket, black sweatpants, black ankle-high boots and black t-shirt with an orange basketball logo with glitter on the front.

"We are appealing to the public and, specifically, to anyone out there who might have information regarding Tyrita's current whereabouts or may know what may have happened to her," said Acting Monmouth County Prosecutor Christopher J Gramiccioni.

Julius was originally said to have last been seen at the Long Branch Train Station on Third Avenue, but Gramiccioni said during an April 8 press conference that investigators have been unable to corroborate that report.

A joint investigation launched by the Long Branch and Tinton Falls Police Departments on March 11 to search for Julius was unsuccessful.

"There are still many lingering questions surrounding the disappearance of Ms. Julius, but one thing we are all certain about is this: someone out there knows something about it. We strongly urge that person to come forward and do the right thing," said Acting Chief of Detectives John G. McCabe, Jr., of the Union County Prosecutor's Office.

Investigators also revealed today that Julius was previously the victim of a serious, yet non-fatal shooting in Linden, on Nov. 24, 2015. The Linden Police Department was called to 913 Middlesex Street in Linden in reference to the report of a shooting. Upon arrival, police found Tyrita shot several times in the driver's seat of her vehicle, which was located a short distance from her residence. At the time of the incident, Tyrita's teenage daughter was seated in the front passenger seat of the vehicle and was also the victim of a non-fatal gunshot wound. To-date, no arrests have been made in connection to this incident.

Anyone with information regarding the disappearance of Tyrita Julius is urged to call Detective Brian Weisbrot of the Monmouth County Prosecutor's Office at 1-800-533-7443 or Detective Kenneth Mikolajczyk of the Linden Police Department at 908-474-8542.

Monmouth County Crime Stoppers Chair Kevin Burke said his organization is a "great template" to get the word out in these types of cases and that he hopes someone will come forward with information.

Julius' paternal grandmother, Claudia Scruggs, called for anyone with information to come forward so the family can have peace.

"Not knowing is the worst of all...we'd like to begin to heal and go on with our lives," Scruggs said.