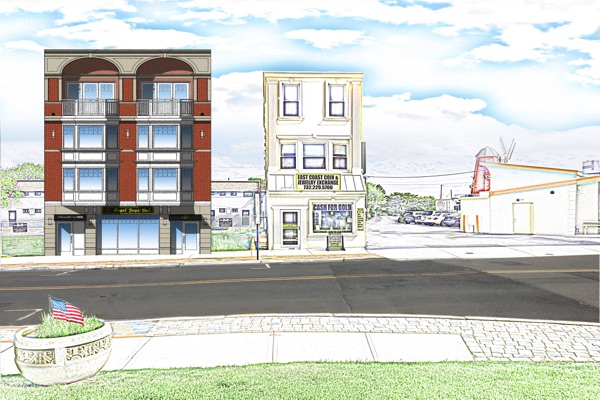 LONG BRANCH: The owners of the Bagel Guys Deli, 75 Brighton Ave., will soon be moving down the street to build a new restaurant in an empty lot that once contained a multistory building right next to East Coast And Jewelry Exchange.

Workers broke ground on the project on May 16 following a small ceremony attended by local officials.

The owners Chris Brigandi and Brad Dias opened their restaurant which features a menu filled with bagels, sandwiches and salads on Sept. 1 2012. After finding early and sustained success, they looked to build a larger space and have their own building.

They were granted Long Branch Planning Board approval for the project last August. The board granted the applicants, West End Group, LLC, site plan approval to construct a 4-story building that will have the bagel deli on the first floor and 6 apartments on three floors located above. At least two of the apartments will be rented by the owners of the business.

The owners needed a variance for the height of the building and for a lack of parking on site, but are providing two spaces in the rear of the building and two more offsite. The West End Overlay zone was created with the intention of allowing smaller projects to share parking with larger parcels in the area, but still calls for the parking requirements.

The new building will be first new construction in West End since a fire destroyed a large portion of the buildings on the north side of Brighton Avenue in 2012.

The partners in West End Group are Brigandi, Dias, Carmen Penta, John Brockriede, Mark Brockriede. Monteforte Construction is the general contractor for the project, which is expected to be completed by the summer of 2018.